The 2019 challenge, Oct. 13-18, included 53 solar-powered vehicles designed and built by teams of university students from 23 countries. The 3,000-kilometer race course extended across the Australian continent from Darwin to Adelaide. For much of the route through the remote outback, terrestrial wireless communication networks are unreachable or non-existent.

This year, two of the entries – the Belgian Agoria Solar Team and the Dutch Nuon Vattenfall Solar Team – had a competitive advantage in the form of high-speed satellite communications on the move (COTM) throughout the race. This was made possible by the ThinKom ThinSat® 300 phased-array antennas that were mounted on the teams’ support vehicles.

The ThinKom antennas were able to sustain uninterrupted voice and broadband data services while traveling at highway speeds on- and off-road. In addition to maintaining constant two-way communication with the drivers on the road, the COTM systems provided live feeds to news media covering the event. The Nuon Vattenfall team also streamed more than 77 hours of live HD video on its YouTube and Facebook channels. The Agoria team streamed large high-quality video files back for press usage during nighttime hours.

“The World Solar Challenge was indeed a ‘challenging’ operational environment for the ThinSat 300 antennas, with extreme heat, wind and sandstorms in the Australian outback,” said Bill Milroy, chief technical officer of ThinKom Solutions. “That being said, the antennas performed flawlessly, providing ubiquitous connectivity with high data throughput rates and live HD video broadcasts while on the move.”

The Belgian and Dutch student teams reported that COTM was a key ingredient in their competitive success, providing vital intelligence and situational awareness to the racers in real time between scheduled stops. The support team could access immediate reports and analysis on weather, road conditions and relative positions of other competitors and communicate directly with the driver to fine-tune the strategy on the fly. For instance, they could predict the cloud cover and sun exposure that would affect the speed and endurance of the solar vehicle and adjust their speed strategy accordingly. 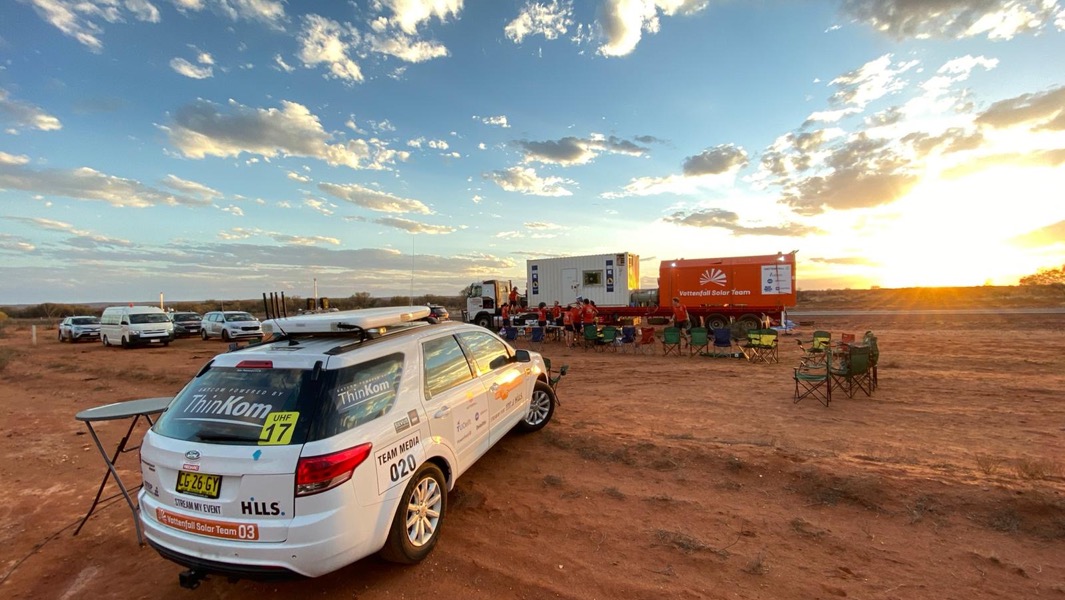 In one case, the advance team precisely timed a stop light sequence at a temporary road construction site ahead, allowing the racing car to time its arrival within seconds of the green light, saving precious minutes.

The Nuon Vattenfall solar car, which was one of the leaders through most of the race, was destroyed in a sudden fire on the last leg. Fortunately, the driver escaped unharmed. Live video was streamed from the accident site thanks to the ThinKom-equipped communication vehicle on the scene. The Agoria racer, only two minutes behind, cruised to victory in Adelaide. 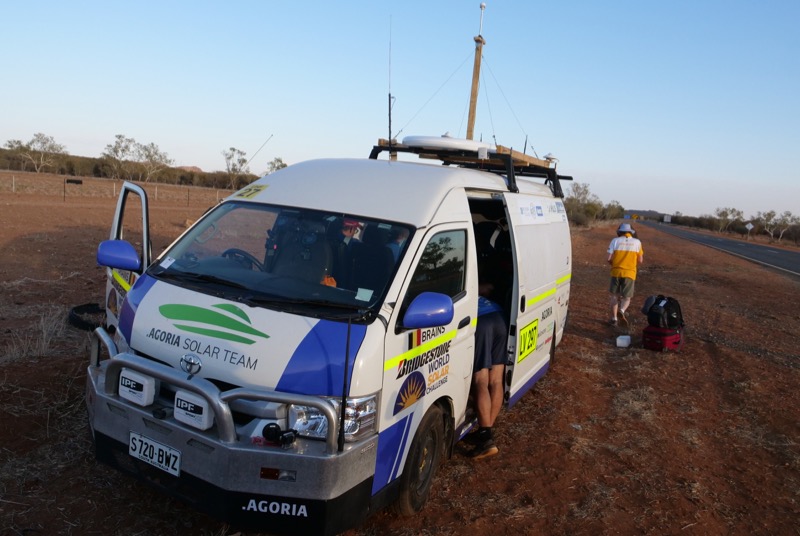 STEP Electronics (HILLS Limited), based in Sydney, was responsible for the installations and technical support for both teams.

“Our mission in the WSCR was to provide a technical, satellite communications solution and backup support services to the two competing teams across some of the harshest and remotest areas of the Australian outback,” said Garry Dawson, satellite systems manager at STEP Electronics. “Our choice of satellite SOTM equipment was unequivocally the ThinSat 300 terminal, which performed equally as well in the 2017 WSCR. Both ThinSat 300 terminals performed effortlessly without mishap during the entire race from Darwin to Adelaide and without any requirement for technical-related support.”

High-resolution versions of included images are available. Captions for images: