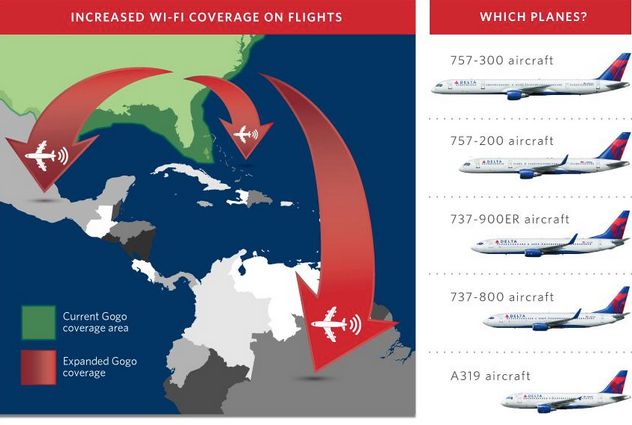 Gogo expects to begin 2Ku installations by 2016 and will continue deploying new technologies to the fleet over several years.  In addition to the 2Ku award, Delta will partner with Gogo in the launch of next generation air to ground technologies for short-haul domestic aircraft flying within the U.S.

“Delta has been a great partner and truly saw the value of a connected fleet very early on. As a result, they now have the largest connected fleet in the world,” said Gogo’s president and CEO, Michael Small.  “By selecting these new technologies for the fleet, Delta will be able to realize the opportunities that increased capacity will bring to their passengers, crew and airline operations.”

Gogo’s 2Ku technology is expected to deliver peak speeds of 70 Mbps at launch, which is 20 times the bandwidth of its original air to ground technology.  Gogo expects peak speeds of more than 100 Mbps as spotbeam Ku satellites become available.  More bandwidth will offer Gogo the opportunity to go beyond passenger connectivity and work with Delta on the development of operational applications and services.

“Our agreement to work together to develop applications and services that connect their aircraft and crew to the Internet at all times will help build a more efficient airline over time,” added Small.