There is a common misperception that electronically scanned arrays (ESAs) are necessary to help unlock the promise that the new NGSO networks bring to SATCOM, and that they are “just around the corner.”

In reality, despite many years and millions of dollars of R&D expenditures, no affordable ESA appears ready for prime time. But beyond the lack of any tangible products, ESAs (affordable or not) have many technical shortcomings that make them unsuitable for many communications applications.

What to Consider When Evaluating Phased Arrays

To help dispel some pervasive myths about ESAs and how they compare to ThinKom’s VICTS phased arrays, we have summarized the key specifications and attributes to consider when evaluating your options.

Antennas should just work—all the time. No airline wants to interrupt their flight schedule to maintain or repair an antenna. Mean Time Between Failures (MTBF), a typical measure of reliability in most hardware, is just as its sounds: the average time it takes for a failure to occur under normal use. The more flight hours a technology has under its belt, the more meaningful and accurate the MTBF.

Myth
Because a ThinKom VICTS phased array has moving parts, it is inherently less reliable than an ESA.

Reality
With no belts, gears or even discrete motors, ThinKom VICTS antennas have far superior reliability than ESAs. Ball bearings are the only contacting parts and are extremely low velocity and lightly loaded, and therefore not a failure mode.

ThinKom’s airborne VICTS antennas have measured mean time between failures (MTBF) of >100,000 hours, with over 1,550 in service, tallying over 25 million operating hours through December 2021.

The first Ku3030, installed on Aeromexico in 2015, is still flying today and providing a robust IFE experience for hundreds of passengers daily, having never been removed or serviced.

Conversely, a typical ESA has roughly 1,000 times more active components than a ThinKom VICTS antenna, so overall reliability can only be high if the reliability for a large subset of these components is very high.

Additionally, the average ESA has >10 times higher thermal dissipation than a VICTS antenna, and it is well known that heat is a primary driver in failure modes. Further, ESAs require receiver/exciter and power supply LRUs – additional custom, low-reliability, single points of failure.

ESA manufacturers often claim that “as individual elements fail, there is graceful degradation.” In reality, antenna patterns incrementally degrade every time an element fails. Therefore, strict regulatory compliance is extremely difficult, if not impossible, to maintain – and this is exacerbated if neighboring elements fail.

Myth
An ESA provides the best hope for a small, low-profile and low-cost antenna for airborne and land-mobile applications.

Reality
ThinKom VICTS antennas are far superior in terms of spectral efficiency. For a given G/T, an ESA requires 2.5 to 8 times the aperture area required for a VICTS antenna. This dramatically higher area (and spectral efficiency) advantage translates into annual bandwidth cost savings of $75K per aircraft or a net present value of $480K per aircraft over 10 years.

How can a VICTS antenna achieve such a sizable efficiency advantage? Consider the table below which examines the key parameters that affect the G/T of both types of antennas of equal size: active ESAs (AESA) and ThinKom VICTS. If your ESA supplier is claiming their area efficiency is on par with a VICTS antenna, ask them to explain how they stack up in comparison to a VICTS antenna for each of these parameters. 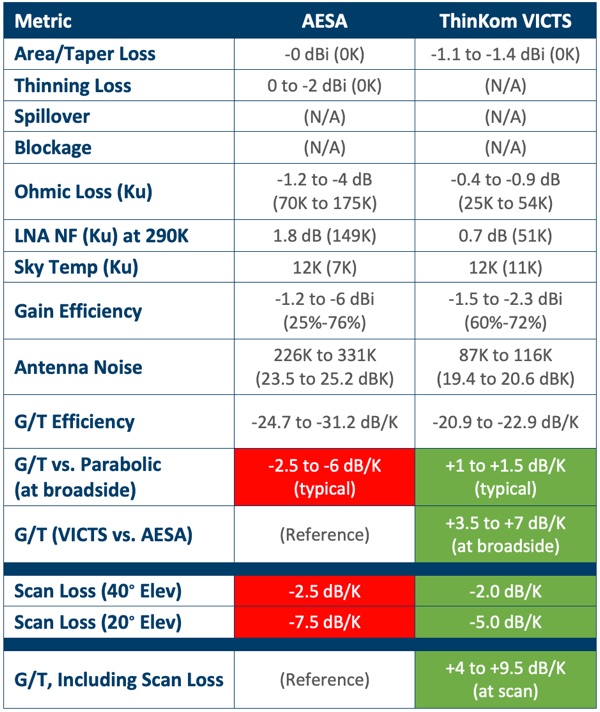 And regarding profile, VICTS antennas are 2 to 4 inches in total height (depending on frequency) and that’s comparable to ESAs.

Aircraft fly all over the world and should have a SATCOM antenna that can keep up. Passengers expect 100% connectivity regardless of where they’re flying, whether in equatorial or polar regions. Phased arrays routinely perform best at high elevation angles (looking straight up), but it’s the low-elevation-angle performance that separates the elite from the pack.

Myth
An ESA’s scan performance is as good as a VICTS antenna.

Reality
While all phased-array antennas experience a degradation in gain as the beam scans down towards the horizon (known as the “cosine roll-off”), ESAs exhibit additional degradation due to their densely packed, two-dimensional, discrete radiating elements.

At low look angles (below 30°), the proximity of the elements causes transmit and receive energy to be absorbed by adjacent radiators – an undesirable phenomenon that causes destructive interference and a decline in operating efficiency. Consequently, ESAs exhibit pronounced degradation due to their accelerated cosine roll-off (cosine^1.4-1.6), in contrast to a VICTS phased array that exhibits a roll-off of cosine^1.0.

As a practical example, every day our Ku3030 system supports multiple flights at latitudes above 70N (i.e., well above the Arctic Circle) reliably closing GSO links below 10° elevation. 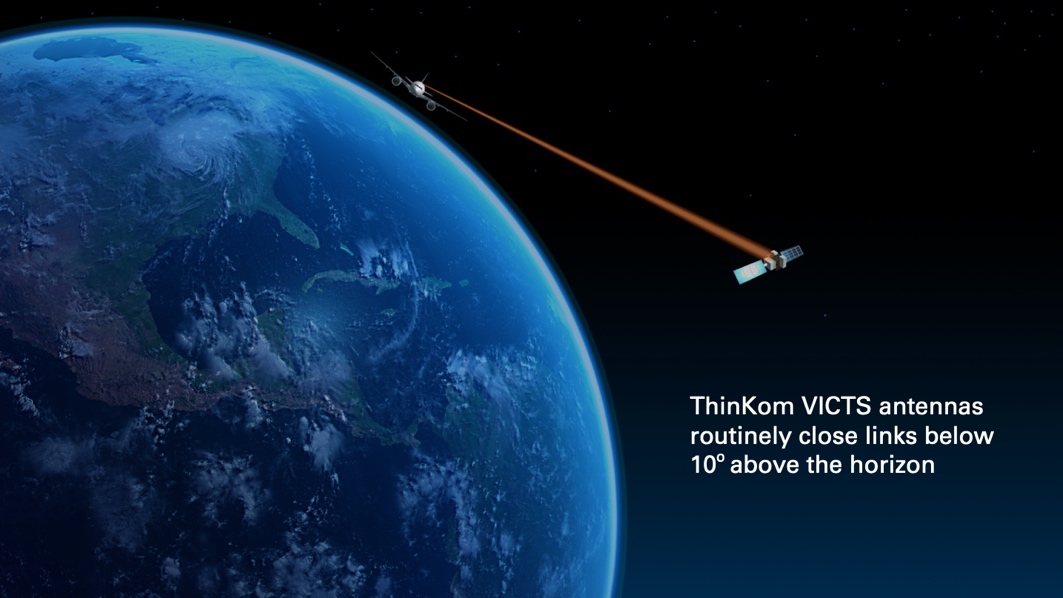 Myth
All phased-array antennas have narrow instantaneous bandwidth (IBW) that limits their use for many government applications and next-generation HTS GSO and NGSO satellite constellations.

Reality
While most ESAs do indeed have narrow IBW limitations (generally less than 125 MHz), ThinKom VICTS antennas actually have an IBW ranging from 500 MHz to 2 GHz, depending on the frequency band and use case. This is 4 to 8 times greater than a conventional ESA.

While a narrow-channel-bandwidth ESA would need to continually repoint for frequency changes, ThinKom phased arrays simply “see” the entire frequency spectrum all at once, with no antenna beam re-steering required.

For upcoming LEO/MEO constellations, antennas must be able to re-steer their beam up to 180o in azimuth to move from a “setting” to a “rising” satellite in less than one second to avoid service lapses.

Myth
To work with new LEO/MEO constellations that require switching satellites every 3 to 30 minutes, you have to use an ESA antenna that has multiple beams.

Reality
VICTS antennas, while mechanical, are nevertheless very agile, switching from satellite to satellite in under 800 milliseconds. This is less than a typical GEO ping time that people are accustomed to today, and can easily be buffered by the modem for a seamless transition and smooth user experience.

Even if only a fraction of the upcoming LEO and MEO constellations are successfully deployed, they will change the whole landscape as we know it. GEOs will still play a vital and stable role in the connectivity mix, however. Providers and end-users should have access to the best of both worlds for risk reduction and healthy competition, thereby lowering the price of bandwidth.

Myth
Only an ESA antenna can support true GSO/NGSO interoperability. 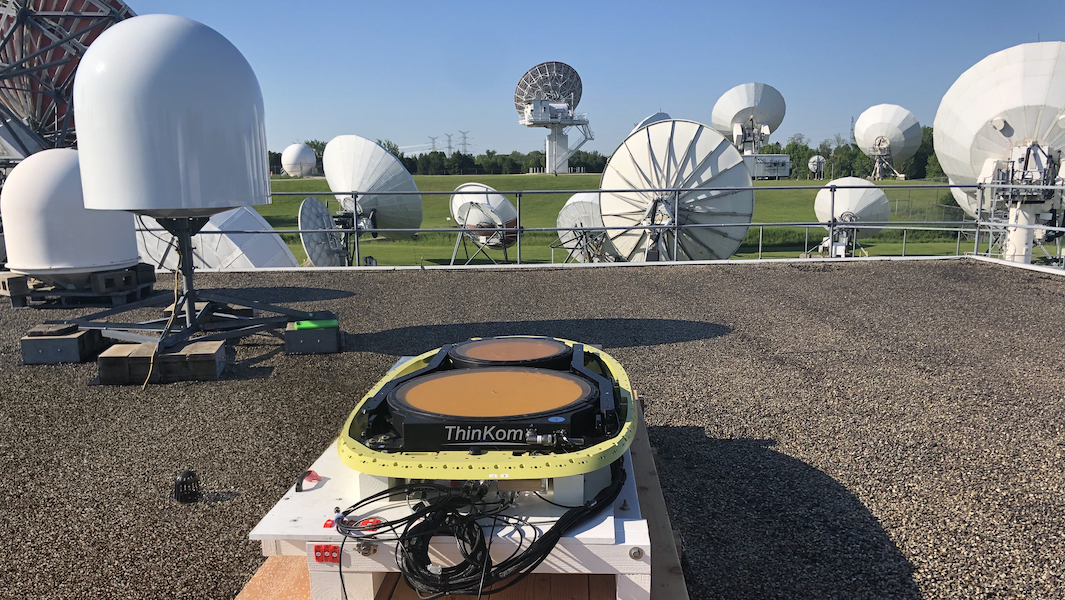 Reality
Active ESAs are quite power hungry, but ThinKom’s antennas run cool and don’t break a sweat, even when running full tilt on the tarmac in Phoenix in the middle of summer. The SSPA or KRFU is located in the temperature-controlled aircraft cabin and away from the effects of solar loading so passengers can stay happily connected even through long flight delays and endless taxiing.

For example, ThinKom’s Ka2517 airborne antenna consumes only 70 W of power (used for beam steering while the aircraft is in flight). The antenna controller and HPA which are installed in the cabin consumes 50 W and 375 W, respectively.

To meet the same performance as the Ka2517 at 25° elevation, an active ESA would require 3 kW of power or more. And high power consumption equates to high heat dissipation which limits long-term reliability of electronic components.

Consequently, most ESAs require thermal management to prevent their electronics from overheating. This burdens the aircraft’s power system, limits gate-to-gate operation (unless liquid cooling is incorporated) and ultimately negatively impacts MTBF due to high component-junction temperatures. A VICTS antenna requires no active cooling.

The ability to operate across the whole spectrum of frequency and polarization provides the ability to be agnostic to all networks. This diversity is important to the airline and connectivity providers, allowing them to consider network changes without having to swap out hardware. Additionally, terminals operating on NGSO satellites (which can be located anywhere in the sky) must limit their emissions so as not to interfere with GSO satellites.

A new and challenging regulatory requiement for phased-array antennas has emerged, as many countries plan to (re)use the same frequencies for terrestrial 5G point-to-point backhaul and distribution services as for satellite systems. Hence, the most recent drafting of the WRC-19 “ESIM” rules which establish new standards to protect terrestrial 5G networks from interference from airborne and other mobile terminals..

Myth
All phased array antennas are unable to meet regulatory requirements for sidelobe control and emissions over large scan angles.

Reality
The elevated sidelobes emitted by some ESAs (and by gimbaled flat-plate antennas) are problematic when operating with NGSOs, rendering them unlikely to meet these new and more challenging ITU requirements.

The unique design of our VICTS antenna results in a surprising series of advantages over ESAs. The VICTS antenna has a large area efficiency advantage, is more reliable, performs much better at low look angles and has proven GSO/NGSO interoperability.

We welcome an open and honest comparison to any ESA and have provided the table below as a tool. We don’t think you will find a phased-array antenna that can come close to matching the performance and advantages of a ThinKom’s VICTS antenna. 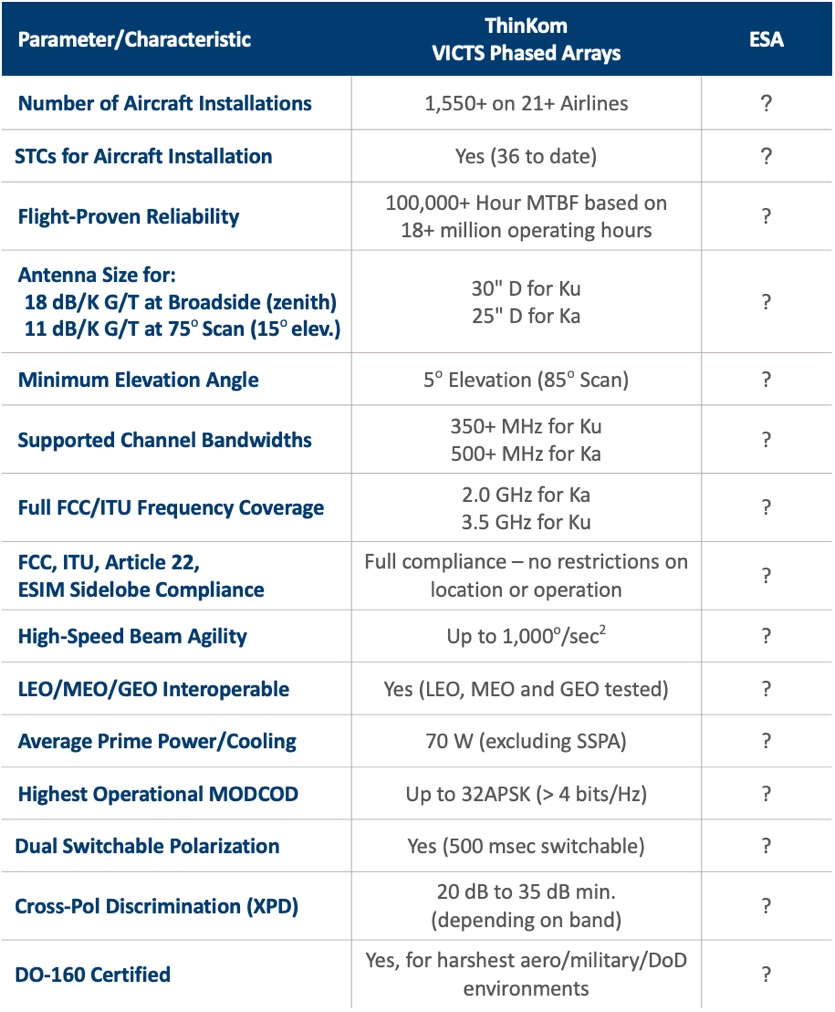