ThinKom Takes Top Honors for Satellite Technology of the Year

WASHINGTON, DC – March 12, 2020 – ThinKom Solutions, Inc., was honored yesterday as the winner of Via Satellite’s 2019 Satellite Technology of the Year Award for its phased-array antenna solutions. The winner was announced at the annual SATELLITE 2020 Awards Luncheon.

The annual award was presented by Via Satellite magazine in recognition of ThinKom’s revolutionary new multi-beam “array of arrays” concept for land-based gateways to communicate with current and next-generation low- and medium-Earth orbit (LEO and MEO) satellite constellations. 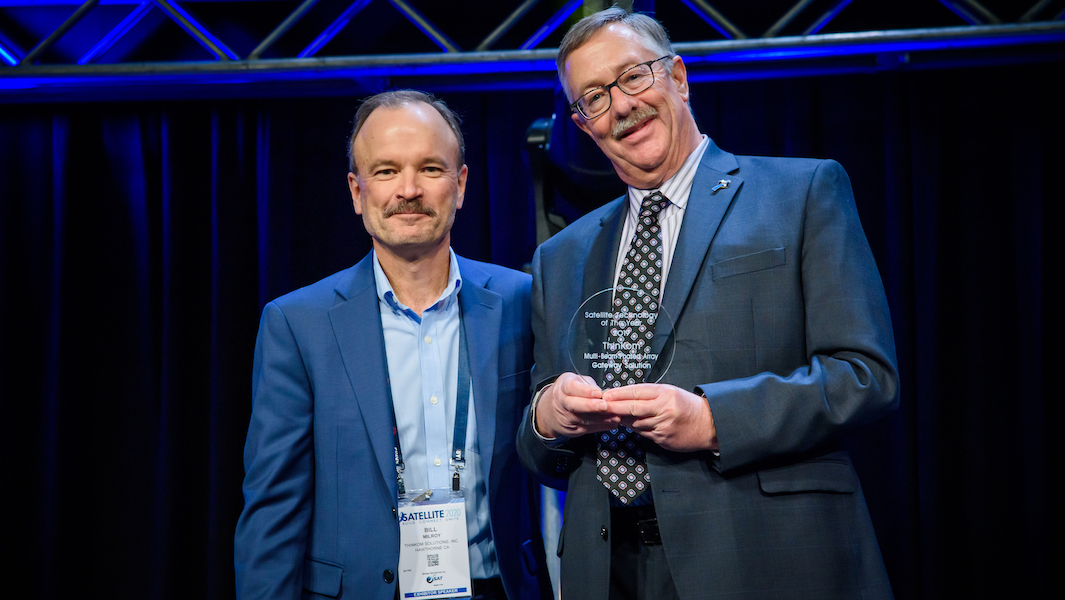 Bill Milroy, CTO of ThinKom Solutions, (left) accepts the Satellite Technology of the Year Award from Scott Chase, publisher emeritus of Via Satellite.

Via Satellite also named ThinKom as one of the top ten hottest companies in the satellite industry in the magazine’s March issue.

Mark Holmes, editorial director of Via Satellite, commented: “There were a number of tremendous nominees, but we believe ThinKom’s multi-beamed phased-array solution, was a significant advance, not just for the antenna industry, but the satellite industry as a whole. With satellite operators becoming more demanding than ever, the onus will be on the likes of ThinKom to come up with the antenna tech to power the new generation of satellites. The company has been a strong performer, and winning Satellite Technology of the Year is a reflection of the regard in which they are held by both Via Satellite and the entire industry.”

In accepting the award, Bill Milroy, CTO of ThinKom Solutions, said: “It’s an honor to be recognized alongside these impressive companies nominated for the Satellite Technology of the Year Award. Together we’re collectively working to meet the challenges to bring to market innovative technologies, products and services that keep the satellite industry vibrant and growing each year.”

The new gateway concept was just one of several major technology achievements for ThinKom during the past year. The company also achieved full commercialization of its Ka-band antenna for in-flight connectivity and completed over-the-air tests on multiple geostationary (GEO), MEO and LEO Ka-band constellations, including an airborne test in which the ThinKom antenna system seamlessly roamed between SES GEO and O3b MEO satellites. The Ka2517 is currently operational on a U.S. military fleet of aircraft and is nearing introduction on several commercial airlines. Multiple STCs are planned this year.

Also unveiled this year was ThinKom’s prototype for a new series of phased-array user terminals for operation on LEO and MEO satellites for emerging high-volume enterprise and consumer market segments. ThinKom worked closely with a Tier 1 contract manufacturer to incorporate proven high-volume manufacturing processes and materials without compromising performance in terms of spectral efficiency, reliability and constellation interoperability.