HAWTHORNE, Calif. – March 28, 2019 – ThinKom Solutions, Inc. today announced that more than 1,000 of its phased array satellite antennas have been installed on commercial aircraft around the world.

Statistics reveal that the company’s ThinAir® Ku-band satellite terminals are currently being used on more than 3,900 flights daily and have accrued over 6.5 million flight hours. 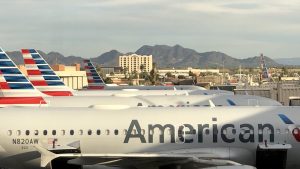 ThinKom phased arrays, shown here, are currently in use by over 15 major commercial airlines

“We have good reason to be proud of our achievements to date, and we are actively pushing ahead to ensure our technology performs equally well with the new frequency bands and next-generation satellite constellations that will be deployed in the coming years.”

The Ka2517 terminals are now in full production and operational on a fleet of U.S. government aircraft, with multiple commercial STC projects underway

Future-Proof Technology
ThinKom is actively testing its phased array technology with the next generation of satellites in low Earth orbits (LEO) and medium Earth orbits (MEO), as well as the new GEO high-throughput satellites (HTS).

“Beam agility to make rapid break-before-make handoffs between a setting and rising satellite is a mandatory requirement for IFC antennas to be interoperable with the fast-moving LEO and MEO satellites,” said Milroy.

“We foresee a future in which there will be a large number of choices for satellite connectivity, with hundreds, if not thousands, of satellites in low, medium and high orbits,” said Milroy. “Our vision is to offer an IFC antenna system that can provide the automatic beam switching, rapid outage recovery and network optimization necessary to support a multi-constellation solution with seamless, gap-free, pole-to-pole connectivity.”